November 28: The Father of the American Short Story

On this day in 1859, writer, essayist, poet & travel book writer Washington Irving passed away at his home Sunnyside in Tarrytown, New York. Best known for his stories The Legend of Sleepy Hollow and Rip Van Winkle, Irving developed a passion for books as a youngster growing up in New York City.
His writing career started in journals and newspapers in the early 1800s. In 1809 his comic history of the Dutch regime in New York - titled A History of New York - was published. Written under the name Dietrich Knickerbocker, the story was an unusual and unique blend of fantasy and history. The satirical tale became part of New York folklore and the made-up name Knickerbocker went on to mean any New Yorker who could trace one's family to Dutch settlers. (Little did Irving know that a certain New York pro basketball team would go on to borrow its name from Knickerbocker.)
Recognizable to most Disney fans is Irving's short story "The Legend of Sleepy Hollow" (which was contained in a collection titled The Sketch Book of Geoffrey Crayon, Gent). First published in 1820 it is among the earliest examples of American fiction still read today and a popular Halloween-themed tale. Disney's 1949 animated feature The Adventures of Ichabod and Mr. Toad features an adaptation of Irving's headless horseman story. The story of Ichabod Crane is narrated by Bing Crosby and features the work of veteran animators Frank Thomas, Ollie Johnston, John Lounsbery, Wolfgang Reitherman, Milt Kahl, and Ward Kimball.
But Irving's impact on American culture stretches beyond Sleepy Hollow. He popularized the nickname "Gotham" for New York City (as all dedicated Batman fans know). Irving also popularized the phrase "the almighty dollar." But one of his most lasting contributions to our culture is the way we perceive and celebrate Christmas. In a revision to a History of New York, Irving wrote a dream sequence featuring St. Nicholas soaring over treetops in a flying wagon! In fact his good friend & writer Charles Dickens credited Iriving as a strong influence in his own holiday writing - A Christmas Carol.
On the evening of November 28, 1859 - Irving died of a heart attack in his bedroom at the age of 76. Legend has it that his final words were: "Well, I must arrange my pillows for another night. When will this end?"
Today Irving's home Sunnyside still stands (just south of the Tapanzee Bridge) in Tarrytown, New York. It is owned and operated as an historic site.

Click HERE for more November 28 Disney history.
Posted by Tony at 8:48 AM No comments:

November 27: To Broadway and Beyond!

On this day in 2008, Buzz Lightyear traveled 2.5 miles down the streets of Manhattan in his inaugural Macy's Thanksgiving Day Parade. Disney has taken part in the holiday parade ever since 1934 (with the first Mickey and Minnie balloons).
Also taking part in Macy's 82nd event, was Miley Cyrus (onboard a Bolt float) and the cast of Broadway's Little Mermaid.

Click HERE for more November 27 Disney history.
Posted by Tony at 9:50 AM No comments:

November 26: Monster Crowd Too Much For Mickey 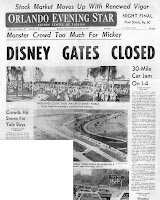 On this day in 1971, the Orlando Evening Star reported on a 30-mile traffic jam of Disney World fans that clogged I-4 in Florida. All of Disney World's 12,000 parking spots for the Magic Kingdom were filled on this Friday after Thanksgiving.

On this day in 1986, actor Paul Frees - best known to Disney fans as the Haunted Mansion's Ghost Host - passed away suddenly in Tiburon, California at age 66.
Solomon Hersh Frees was born in Chicago in 1920 and began acting in radio around 1942. His career was cut short when he was drafted into the second world war. Frees took part in D-Day but was wounded and returned to the U.S. After recuperating, he attended the Chouinard Art Institute - but due to his wife's ailing health, Frees dropped out and returned to work in radio. This led to work in movies and later TV where he was often called upon to correct the dialogue of other actors. An example of this was his work in Disney's The Ugly Dachshund in which Frees dubbed the entire role of Eddie (played by Dick Wessel - who had died of a sudden heart attack).
His most memorable Disney credits includes the voice of Professor Ludwig von Drake in eighteen episode of Disney's television anthology series. His theme park credits include the Haunted Mansion (as the Ghost Host), Pirates of the Caribbean, and Adventure Thru Innerspace.
Over his 40-year career Frees was involved in more than 250 films, cartoons, and TV appearances including a live-action role in Disney's 1959 The Shaggy Dog.
If you've ever watched any of the Rankin/Bass TV Christmas specials ... you've also surely heard the voice of Paul Frees!

On this day in 2002, The Santa Clause 2: The Mrs. Clause (the sequel to the 1994 film The Santa Clause) was released in the U.S. by Buena Vista Pictures.
Nearly ten years have passed since Scott Calvin (played by Tim Allen) became "Santa" and he's been one jolly elf. That is until Bernard the Arch-elf (played by David Krumholtz) and fellow elf Curtis (Spencer Breslin) discover there is another clause ... the Mrs. Clause! Scott must get married before Christmas Eve or the clause will be broken and Christmas will die away. Just to make thinks crazier, Scott has to contend with his son Charlie who's misbehaving in order to get his dad's attention. In the end Scott marries his son's principal (played by Elizabeth Mitchell) and ultimately Christmas is saved!
You might find the soundtrack more interesting than the film ... as it includes holiday classics by Eddie Money & Ronnie Spector, Hilary Duff, SheDAISY, Brian Setzer, Louis Armstrong, Brenda Lee, and Steve Tyrell.