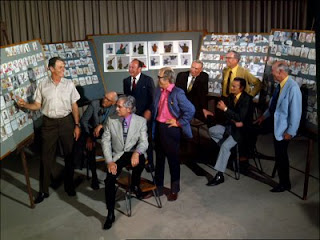 On this day in 1912, one of Walt Disney's "Nine Old Men" (a group of influential animators who were responsible for the studio's most famous works) was born in California. Later named a Disney Legend, this gentleman's work ranged from the 1937 Snow White to the 1977 The Rescuers. An author and train enthusiast, he was also the last of the nine to pass away (in 2008).
Follow this LINK to discover the name of this National Medal of Arts winner.
Posted by Tony at 6:21 AM No comments: 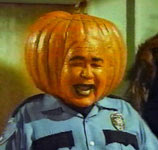 On this day in 1977, comedy great Jonathan Winters (the madcap master of make believe) turned into a pumpkin!
Follow this LINK to learn more!
Posted by Tony at 6:12 AM No comments: 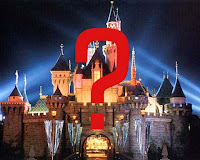 On this day in 1998, Disney and a certain energy company announced a partnership to makeover one of Disneyland's beloved original attractions.
Click HERE to find out more.
Posted by Tony at 11:49 AM No comments: 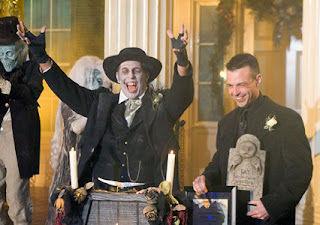 On this day in 2004, a new tombstone was added to Disneyland's Haunted Mansion "cemetery."
Who was it for? An Imagineer ... or a Cast Member ... or a grim grinning ghost?
Neither ... click HERE to find out!
Posted by Tony at 10:47 AM No comments:

October 17: The End Of The Innocence

On this day in 1965, the 1964-65 New York World's Fair came to an end. Running for two seasons (starting in April 1964), the fair included 4 attractions created by Disney: Progressland, Great Moments With Mr. Lincoln, It's A Small World, and the Magic Skyway.
Learn all about Disney's contributions HERE and then head over to discover more October 17 Disney history.
Posted by Tony at 12:01 AM No comments:

On this day in 1923, the Disney Brothers Studio was founded by Walt and Roy Disney in California. Why this date? They signed a contract on October 16 with a cartoon distributor for a new series of animated/live-action shorts called Alice Comedies.
Prior to this Walt had tinkered with animation but lack of any steady work in Hollywood had prevented him from starting his own studio. But now that a New York cartoon distributor named M. J. Winkler was interested in their idea of mixing a live-action girl in a cartoon world - the time was right to begin what today is called The Walt Disney Studios.
The Disney Brothers Studio was located in the rear of a small store at 4651 Kingswell Avenue (a few blocks from their Uncle Robert's home - where Walt had first lived upon arriving in California.)
Rent for the office space was ten dollars a month.

Click HERE for more October 16 Disney History.
Posted by Tony at 6:38 AM No comments:

On this day in 1971, LIFE magazine told readers:
"The new site is Florida, but the air is pure old Disney." 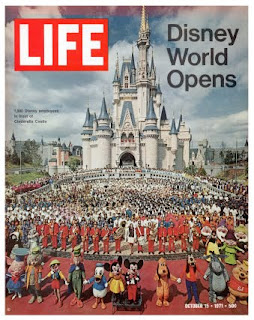 Click HERE for more October 15 Disney History.
Posted by Tony at 7:08 AM No comments:

On this day in 2003, Epcot's Mission: SPACE attraction had an official grand opening. 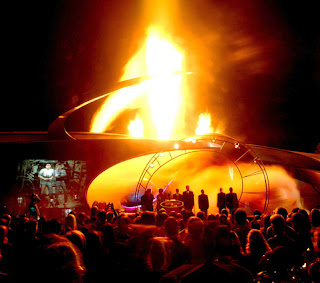 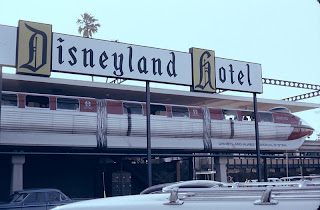 On this day in 1955, the Disneyland Hotel first opened in Anaheim, California.
When Disneyland debuted in July 1955, the park was in a remote area not near any motels or hotels. Walt Disney wanted to build an inn for Disneyland visitors, but his finances had been depleted by the construction of the theme park. So he negotiated a deal with Jack Wrather (a Texas oil millionaire) and his business partner Maria Helen Alvarez to own and operate a hotel across from Disneyland.
For the next 3 years, Wrather-Alvarez Productions ran the Disneyland Hotel. (In 1958 Wrather bought Alvarez out ... making him the sole owner until his death in 1984.) The original hotel consisted of just over 100 rooms in 5 two-story complexes, but over the years the hotel was expanded to include 3 guest room towers, restaurants, and other modern conveniences.
Today Disney owns the Disneyland Hotel, but none of the original 1955 portions of the building remain. 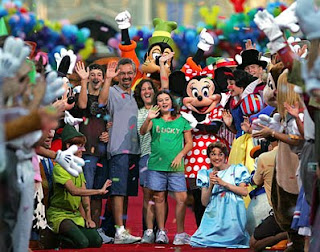 On this day in 2006, the Spangler family from Randolph, Ohio became the first big winners of Disney's "Year of a Million Dreams" celebration.
One of 50,000 online entrants, Tammy and Raymond Spangler along with their children Derrick and Ashley, were rewarded with a morning at the Magic Kingdom in Disney World ... all to themselves. On this Wednesday morning, the family walked hand-in-hand on a red carpet down a very quiet Main Street. Halfway to the Cinderella Castle they were suddenly surrounded by some 1500 Disney characters (including mice, maids, baseball players and princesses)!
For the next few hours the Spanglers rode Space Mountain, Dumbo, Jungle Cruise, and other attractions with no wait time. (The Magic Kingdom opened on this day at 10 a.m. to the general public.)

Click HERE for more October 4 Disney History.
Posted by Tony at 11:03 AM No comments:

October 03: Off To Never Land 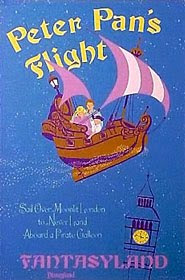 On this day in 1971, the Walt Disney World attraction Peter Pan's Flight opened in Fantasyland. Only the third day of business for the young Magic Kingdom, Peter Pan's Flight is based on the animated 1953 feature and the original Disneyland version.
Guests "fly" over London seated in pirate galleons while experiencing the sights and sounds of Peter Pan.
One of the major differences with the Florida version is the load/unload area which features moving ramps (like the Haunted Mansion) to allow for a smooth flow of guests. Although the Disneyland version was updated in the early 1980s, the WDW version was the first to have Audio-Animatronic characters.
Today the attraction is considered low-tech, but it is still one of the most popular Magic Kingdom attractions ... which is amazing considering it hasn't changed since opening!