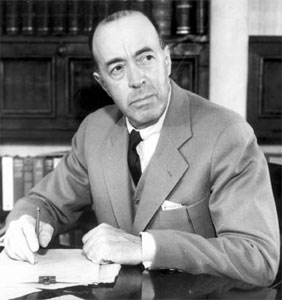 On this day in 1875, Edgar Rice Burroughs, the creator of Tarzan and one of the great
pioneers of modern science fiction, was born in Chicago, Illinois.
Burroughs was a soldier, business executive, gold miner, cowboy, storekeeper, and policeman before he turned to writing as a career. He wrote more than 20 novels depicting the adventures of Tarzan. After the release of Snow White and the Seven Dwarfs, he wrote a letter to Walt Disney about the possibility of making his creation into an animated feature. His work eventually did become the inspiration for Disney's 1999 animated feature Tarzan and later a Disney produced Broadway stage musical.
Burroughs also wrote popular science fiction and fantasy stories involving Earthly adventurers and Martians.  He began writing a series called the Barsoom books in the second half of 1911. (Barsoom was his fictional representation of the planet Mars.) The final book in the series was titled John Carter of Mars (to be released as a major motion picture by Disney in 2012). In the early twentieth century, Burroughs compiled a glossary of the terms used in these novels. In 1957, Walt Disney created an animated version of it for his "Mars and Beyond" TV episode. Today Burroughs even has a large crater on Mars named for him!