November 30: Birth of a Literary Icon 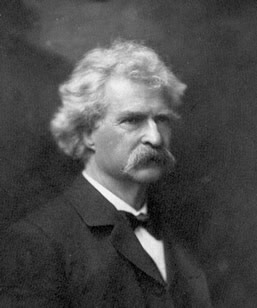 On this day in 1835, Samuel Langhorne Clemens better known as author & humorist Mark Twain was born in Florida, Missouri (a village in Monroe County). Noted for his novels Adventures of Huckleberry Finn and The Adventures of Tom Sawyer, Twain was immensely popular in his lifetime and admired by many ... including Walt Disney. Learn more about Twain's role in Disney history .... HERE.
Posted by Tony at 6:56 AM No comments: 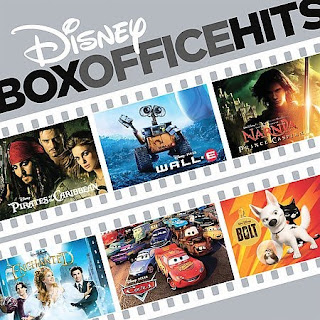 On this day in 2008, Walt Disney Records released "Box Office Hits," a collection of the best songs from Disney's biggest movies.

Tracks include:
1. "Ever, Ever After" sung by Carrie Underwood and written by Stephen Schwartz and Alan Menken for Enchanted
2. "Down to Earth" sung, written (along with Thomas Newman) & produced by Peter Gabriel from the soundtrack for WALL-E
3. "Real Gone" performed and written (along with John Shanks) by Sheryl Crow for the 2006 Cars
4. "Little Wonders" written & sung by Rob Thomas and produced by Danny Elfman for Meet the Robinsons
5. "This Home" written & recorded by the band Switchfoot and originally featured on the soundtrack for the 2008 The Chronicles of Narnia: Prince Caspian
6. "Breakaway" sung by Kelly Clarkson and written by Avril Lavigne, Bridget Benenate & Matthew Gerard for The Princess Diaries 2: Royal Engagement
7. "Can't Take It In" sung by Imogen Heap and used during the closing credits of The Chronicles of Narnia
8. "I Thought I lost You" performed by Miley Cyrus and John Travolta from the animated Bolt
9. "Our Town" performed by James Taylor and written by Randy Newman for Cars
10. "All I Know" performed by Five For Fighting (the stage named of singer-songwriter John Ondrasik) from Chicken Little
11. "The Call" by singer-songwriter & pianist Regina Spektor and written especially for The Chronicles of Narnia: Prince Caspian
12. "Where Is Your Heart At?" sung by singer-songwriter Jamie Cullum - but composed by Rufus Wainwright - for Meet the Robinsons
13. "Le Festin" performed by French singer Camille for Ratatouille
14. "Jack's Suite" by Hans Zimmer and Paul Oakenfold for Pirates of the Caribbean: At World's End
15. "UNKLE Reconstruction" by the British music outfit UNKLE for The Incredibles

Give a click HERE for much more November 25 Disney history.
Posted by Tony at 8:56 AM No comments: 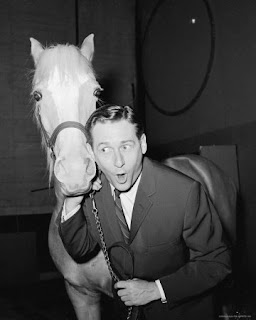 On this day in 1919, character actor Alan Young was born in Northern England. Fans of the CBS 1960s sitcom Mister Ed would probably be surprised to know that Young's convincing "American accent" is not his own! (Young played the eccentric and clumsy Wilbur Post who owned a talking horse named Ed.) But "doing voices" is a natural for this Emmy Award-winning actor whose career first started in radio back in the early 1940s. What is Young's connection to Disney? You've heard his most popular Disney character dozens of times ... click HERE to reveal the answer.
Posted by Tony at 7:21 AM No comments: 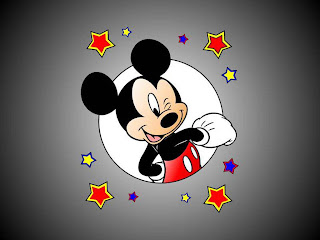 November 17: Nixon at the Contemporary 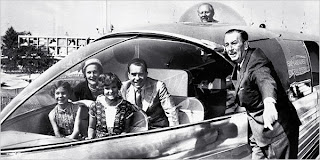 President Richard Nixon during his early years as a politician had been a big fan of Disneyland. He and his family first visited the Anaheim park back in August 1955. As vice president, he was on hand in June 1959 for the festivities surrounding the debut of Disneyland's monorail. In 1968, he and his family once again returned for a happy visit.
As president, he presented Lilian Disney (Walt's wife) with a commemorative medal for her husband back in 1969.
But on this day in 1973, President Nixon's reason for visiting Walt Disney World was strictly business. His presence at the Contemporary Resort on November 17 can even be thought of as historical.
Click HERE to learn more.
Posted by Tony at 7:27 AM No comments: 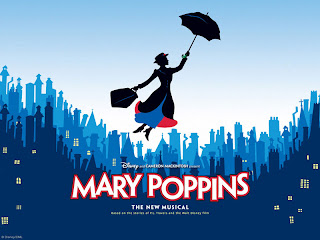 On this day in 2006 Mary Poppins, a Disney Theatrical/Cameron Mackintosh musical production of the classic film, had its official opening night at the New Amsterdam Theatre in New York City. Already a hit in London, the Broadway version had been in previews since October 14.
Click HERE for more November 16 Disney history.
Posted by Tony at 6:44 AM No comments: 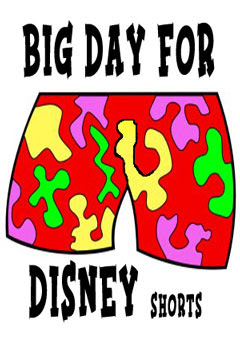 Click HERE for
November 14
Disney History!
Posted by Tony at 10:01 AM No comments: 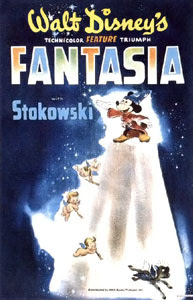 On this day in 1940, Disney's animated feature Fantasia premiered in New York City. But November 13 is also noted for a handful of other famous Disney debuts:
In 1991 Beauty and the Beast premiered in U.S. theaters.
Disney's musical stage version of The Lion King officially debuted on Broadway in 1997.
In 1999 Disney-Pixar's Toy Story 2 had a grand premiere in Hollywood.
The following year in 2000 the live-action 102 Dalmatians debuted at Radio City Music Hall in New York City.

Click HERE for more November 13 Disney history.
Posted by Tony at 8:56 AM No comments: 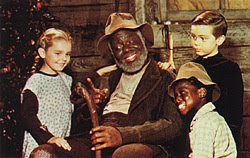 On this day in 1946, Disney's Song of the South was first released. Based on the Uncle Remus stories by author Joel Chandler Harris, the mostly live-action film also features 25 minutes of animation. Set in the Deep South shortly after the American Civil War, the live actors provide a frame story in which Uncle Remus relates the folk tales of the animated Br'er Rabbit, Br'er Fox and their animal friends.
Never released in its entirety on home video in the U.S., some believe its content could be interpreted as racially insensitive. (For that matter - maybe Hollywood should re-think the Godfather and hundreds of other films that unfairly portray Italians and Italian-Americans as nothing more than gangsters.)
Stay positive Disney fans ... maybe Song of the South will see the light of a DVD day, until then have a Zip-a-Dee-Doo-Dah day (and click HERE for more November 12 Disney history).
Posted by Tony at 9:40 AM No comments:

On this day in 1997, Beauty and The Beast: The Enchanted Christmas was released direct-to-video (which meant VHS tape back in the pre-DVD days). Sometimes referred to as a midquel (a sequel which can take place during a chronology gap within a single previously completed work) this video takes place within the time line of the original Beauty and the Beast, but it centers around the previous Christmas festivities!
Belle (voiced by Paige O'Hara) prepares the castle for Christmas against Beast's (Robby Benson) wishes, trying to bring him happiness for the season. Many of the original voice cast returned for The Enchanted Christmas, including Jerry Orbach (as Lumiere), Angela Lansbury (as Mrs. Potts), and Paul Reubens (as Fife).
Directed by Andy Knight, Beauty and The Beast: The Enchanted Christmas won two WAC Awards (given by World Animation Celebration) and was nominated for a Saturn Award and multiple Annie Awards. 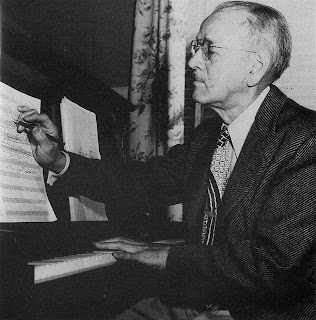 On this day in 1891, "the most famous unknown composer of the 20th century" was born in Lexington, Missouri. If you are a fan of Disney's early shorts or Warner Brothers' Looney Toons and Merrie Melodies ... you have certainly heard his musical magic. An innovator, he was the first music director to extensively use the metronome to time film scores (a common practice today).
Although he only worked for Disney for 2 years (1928-1930), his contributions - especially to Disney's Silly Symphonies - are an important chapter in the history of the House of Mouse.
Click HERE to discover more about "the most famous unknown composer of the 20th century."
Posted by Tony at 9:34 AM No comments:

November 09: What A Character! 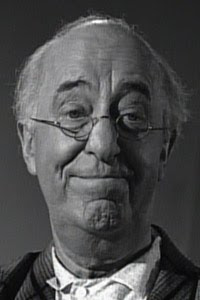 On this day in 1886, character actor Ed Wynn was born in Philadelphia, Pennsylvania. With his tousled hair, rubbery face, giggly voice, and kind demeanor, he was more a clown than a traditional comedian. A star first in vaudeville, he eventually became known for his film and television appearances (including his own TV series "The Ed Wynn Show"). Although known for his humorous role of the "Perfect Fool," Wynn actually had a career as a dramatic actor as well. He appeared in the classic broadcast of Rod Serling's play Playhouse 90: Requiem for a Heavyweight in 1956 (along with his son Keenan) and a 1959 episode of The Twilight Zone.
Most Disney fans are well aware of his contributions to Disney films ... but if you aren't quite sure - CLICK HERE.
"I'll be back in a flash with more trash." -Wynn's famous exit line
Posted by Tony at 8:54 AM No comments: 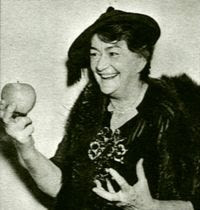 On this day back in 1872, the actress who supplies the voice for the Wicked Queen in Disney's 1937 Snow White and the Seven Dwarfs (and the Queen's alter ego who gave Snow White the poisoned apple) was born Tennessee. An accomplished stage and screen actress, she is best known for her performances in the feature films A Tale of Two Cities and Little Caesar. Among her hits on Broadway - Uncle Tom's Cabin, Seven Days, and Way Down East.
Who was this leading lady? Click HERE to find out.
Posted by Tony at 8:07 AM No comments: 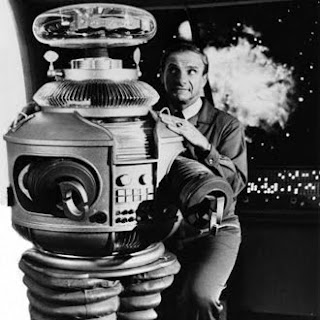 On this day in 1914, stage & character actor Jonathan Harris was born in New York City. Among his best known roles ... the comic villain Doctor Zachary Smith on the 1960s sci-fi TV series Lost in Space.
A popular character actor for over 30 years, Harris made appearances on such shows as The Twilight Zone, The Adventures of Ozzie & Harriett, Get Smart, and Fantasy Island. But it was his role as the cowardly Dr. Smith on Lost in Space that most will remember him for. Often providing comic relief, his banter with the Robot resulted in such quips as "Farewell my platinum-plated-pal. Give my regards to oblivion!" and "Unhand me, you mechanical moron!"
(The cast of Lost in Space included actor Guy Williams - Disney's Zorro - as Doctor John Robinson and Billy Mumy - star of Disney's 1969 movie Rascal - as 9-year-old Will Robinson.)
What is Disney's link to Jonathan Harris? Click THIS LINK to read more.
Posted by Tony at 8:37 AM No comments:

November 05: A Bit Of Martha's Vineyard In Florida

On this day in 1990, Disney's Yacht Club Resort opened at Walt Disney World. A New England nautical-themed resort, it is located next to its sister resort, Disney's Beach Club Resort, and across Crescent Lake from Disney's BoardWalk Resort.
Posted by Tony at 7:09 AM No comments:

November 04: This Time The Sky Really Is Falling! 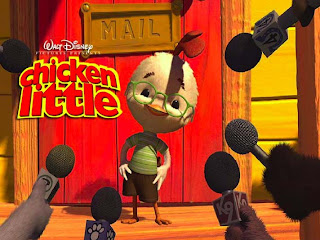 On this day in 2005, Disney's animated Chicken Little opened in theaters. Disney's first fully computer animated film (as Pixar's films at that time were distributed but not produced by Disney, and the 2000 Dinosaur was a combination of live-action & computer animation) Chicken Little was written by Mark Dindal (who also directed) and Mark Kennedy with the screenplay by Steve Bencich, Ron J. Friedman, and Ron Anderson. In its opening weekend, Chicken Little debuted at number one, the first Disney animated film to do so since Tarzan in 1999.
Posted by Tony at 10:43 AM No comments: