March 30: Birth of a Disney Legend

On this day in 1913, Marc Davis (animator and one of Walt's early Imagineers) was born in Bakersfield, California.
First employed at the Disney Studio in 1935, he worked on such classic animated features as Snow White and the Seven Dwarfs, Bambi (developing young Bambi and Thumper), and Song of the South (animating Brer Rabbit). But his most memorable creations are Tinker Bell in Peter Pan and Cruella De Vil in 101 Dalmatians.
One of Walt's "Nine Old Men," Davis was also a brilliant draftsmen. As a member of WED Enterprises he helped design such classic Disneyland attractions as The Enchanted Tiki Room, Pirates of the Caribbean, and Haunted Mansion. He also had a helping hand in designing all 4 of Disney's 1964 World's Fair attractions.
Named a Disney Legend in 1989, Marc Davis passed away in January 2000. 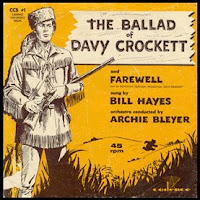 On this day in 1955, "The Ballad of Davy Crockett," a song written by George Bruns & Tom Blackburn and sung by Bill Hayes, peaked at #1 on Billboard's pop singles chart. It stayed at that position until April 23!
Amazingly the song was also recorded by Fess Parker and Tennessee Ernie Ford ... all in 1955!
"The Ballad of Davy Crockett" was first introduced to audiences on Disney's TV miniseries Davy Crockett back in December 1954.
Bill Hayes, an actor & singer whose first success was on the Sid Caesar and Imogene Coca variety TV show Your Show of Shows, had the first and most successful version of the song.
Actor Fess Parker's recorded version reached #6 on the weekly charts and #31 for the year. As he played Davy Crockett for Disney, it was natural that Parker record "The Ballad of Davy Crockett"!
Tennessee Ernie Ford's version also scored very well - peaking at #4 on the weekly country chart, #5 on the weekly pop chart, and at #37 for the year! Ford, a recording artist and TV host, was already well known for his country & western, pop, and gospel music.
The song's music was written by George Bruns, an Academy Award nominated composer for film and TV. Disney fans know Bruns for his song "Yo Ho (A Pirates Life fore Me)," which he co-wrote with Xavier Atencio.
Author, screenwriter, and lyricist Tom W. Blackburn wrote the words to "The Ballad of Davy Crockett." His work can also be heard in Disney's TV mini-series Johnny Tremain and the feature Westward Ho, The Wagons!
The song was just a part of a Crockett-frenzy (which included imitation coonskin caps) that swept the U.S. during the 1950s!

Click HERE for more March 26 Disney history.
Posted by Tony at 11:11 AM No comments:

On this day in 1947, Reginald Kenneth Dwight - better known as multi-Grammy winning legend Elton John - was born in Middlesex, England. Since 1969 the singer-songwriter-pianist has toured across the world consistently as a solo performer and with the Elton John band. During his 4-decade career, John has sold over 200 million records.
Disney fans know John from his collaboration with Tim Rice on music for The Lion King - which garnered not only a Best Male Pop Vocal Grammy but his first Academy Award and a Golden Globe. John also collaborated with Rice on Disney's Broadway smash Aida - which earned a Grammy for Best Musical Show Album.
Inducted a Disney Legend in 2006, John has forever carved a place for himself in Disney history. 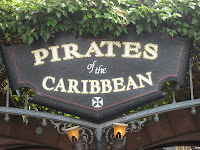 Click HERE for more March 18 Disney history.
Posted by Tony at 7:22 AM No comments:

On this day in 1934, an Oscar was presented to Disney for his short subject cartoon The Three Little Pigs at the 6th Academy Awards. Ironically it beat out Disney's own Building a Building and Walter Lantz's The Merry Old Soul.
Originally released on May 27, 1933 (by United Artists) The Three Little Pigs was directed by Burt Gillett and based on the famous fairy tale of the same name. The short was remarkably successful with audiences of the early 1930s, so much that theaters ran the cartoon for months after its debut! The short's original song "Who's Afraid of the Big Bad Wolf," written by composer Frank Churchill, went on to be a best-selling single and an anthem of the Great Depression.
The Three Little Pigs featured the voices of Pinto Colvig (as Practical Pig), Billy Bletcher (as the Big Bad Wolf), Mary Moder (as Fiddler Pig), and Dorothy Compton (as Fifer Pig).
In 1994, it was voted #11 of the 50 Greatest Cartoons of all time.
"That was the first time that anybody ever brought characters to life in an animated cartoon. They were three characters who looked alike and acted differently." -veteran animator Chuck Jones

Click HERE for more March 16 Disney history.
Posted by Tony at 9:17 AM No comments:

On this day in 1905, comedic actor Richard Haydn was born in London, England. Fans of Disney's 1951 animated feature Alice in Wonderland know Haydn as the voice of the Caterpillar. 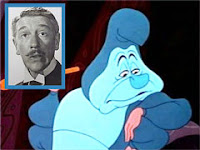