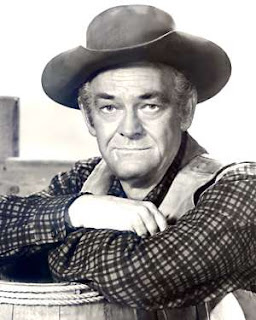 Character actor John McIntire was born on this day in 1907 in Spokane, Washington. Raised in Montana, he grew up around ranchers and cowboys - an experience that later influenced his performances in dozens of westerns.
First acting in radio and on the stage, McIntire didn't make his film debut until 1947 (at the age of 40) in a feature called The Hucksters. He went on to appear in about 65 more films (often playing western characters) and in the mid-1950s, began working in television on such series as Wagon Train and The Virginian.
He married actress Jeanette Nolan (who he would later work with) in 1935 and they had two children.
What is McIntire's connection to Disney?
Click HERE to find out.
Posted by Tony at 6:45 AM No comments: 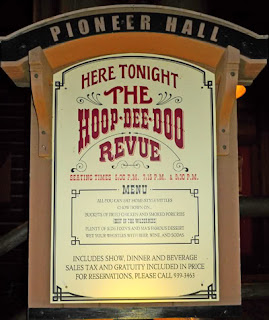 On this day in 1974, Walt Disney World's "Hoop-De-Doo Musical Revue" debuted in Pioneer Hall at Disney's Fort Wilderness Resort & Campground.
A dinner show that still runs today, the revue started life as part of the Walt Disney World College Fine Arts Workshop. A special summer program that allowed talented college kids from all over the country to perform at WDW, the workshop also included the All American Marching Band and the Kids of the Kingdom.
A Disney cast member named Bob Jani (at the time Vice President for Live Entertainment) wanted to put together something at a large restaurant that sat in Fort Wilderness. Used to serve meals to campers, Pioneer Hall (opened since April 1974) had a huge stage and Jani felt the facility was being under-utilized.
A western musical was put together, with the help of director Larry Billman and veteran songwriter Tom Adair, called Hoop-De-Doo. (Adair had helped write music for Disneyland's Golden Horseshoe Revue.) The original college workshop company of enthusiastic performers included Marilyn Magness, Ted King, John Windsor, Jude Kothman, Kate Richards, Gary Kortemier, Leslie Norris, and Brad Gooding. The show's concept was simple - a group of performers would provide an evening's worth of song, dance and entertainment while the audience enjoyed an all-you-care-to-eat family style meal. The show was a smash hit.
But as the summer of 1974 came to an end, Disney management realized the cast would be returning to their respective colleges. Disney wanted to hire the performers full-time ... but wasn't in a position to persuade students to drop out of college to work at a campground. An all-pro cast was assembled and the Hoop-De-Doo Musical Revue continued.
Today it is one of the longest running shows in WDW history with over 35,000 performances! 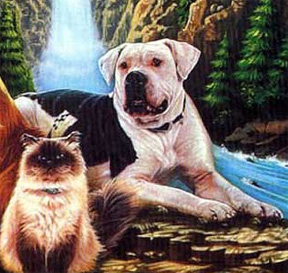 On this day in 1961, the actor who supplied the voice for this dog (pictured left) in Disney's 1993 live-action Homeward Bound: The Incredible Journey, was born. Considered to be a sequel to the early 1960s film Homeward Bound, the film tells the story of 3 lost pets. Chance, a rambunctious bulldog pup, along with Shadow (an aging, wise dog); and Sassy (a snobby cat) are left behind when their family goes on vacation.
This Canadian-born actor who supplied the voice for Chance, also shares a birthday with a swash-buckling American actor and a certain famous duck.

Born today in 1953, Walt Disney World fans may recognize this familiar face. Who is he and where can he be seen 4 nights a week?

Click HERE to find out.
Posted by Tony at 6:45 AM No comments: