February 27: As Dreamers Do 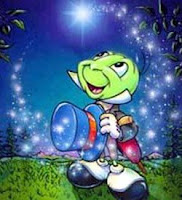 On this day in 1941, songwriters Leigh Harline and Ned Washington received Oscars for their song "When You Wish Upon a Star" at the 13th Annual Academy Awards. First used in the 1940 animated classic Pinocchio, Harline & Washington each received an Academy Award for Best Song.
Sung by Cliff Edwards (the voice of Jiminy Cricket) over the film's opening credits and during the final scene, the song went on to become Disney's iconic theme. "When You Wish Upon a Star" was used in the opening sequence of Disney's anthology television series and in multiple versions of Walt Disney Pictures' opening logos. Even the ships of the Disney Cruise Line use the first seven notes of the song as their horn signal!
The ultimate strength of a tune like "When You Wish" can be measured by the amount of performers who have covered it since 1940. Those who have "wished upon a star" include:
Diana Ross & the Supremes, Louis Armstrong, Chet Atkins, Gene Simmons, Barbra Streisand, The Manhattan Transfer, Ringo Starr, American Hi-Fi, Jesse McCartney, Steve Tyrell, Meaghan Jette Martin, and even the Mormon Tabernacle Choir!

Click HERE for more February 27 Disney history.
Posted by Tony at 12:01 AM No comments:

On this day in 1971 singer-songwriter Daniel Powter was born British Columbia. Best known for his piano driven pop single "Bad Day," he penned "The World You've Dreamed of Lately" - a song for Disney's "Where Dreams Come True" marketing campaign.

On this day in 1960, the VIII Winter Games (the 1960 Winter Olympics) began in Squaw Valley, California (located near the Lake Tahoe basin). It was the first return of the Olympic Games to North America in 28 years and Disney was in the thick of it.
The prominent 79-foot tall Tower of Nations framing out the entrance to the valley was designed by Disney artist John Hench. It was crowned with 5 Olympic rings, crests of competing nations and 30 flagpoles for flags of participating nations. Each flagpole had a plaque signed by Walt Disney! (After the games, these flagpole were re-located to such places as Walt Disney Elementary in Missouri and the Disney Studio in California.)
Another first for these games was a unique Olympic torch, also designed by John Hench. (In fact all future torches were based on his design!)
After a near snow-less season, a heavy storm moved in and dropped plenty of the white stuff on this day. At the Opening Ceremonies, the storm broke and the skies cleared just as Vice President Nixon declared the Games officially open.
Walt Disney himself was the Head of Pageantry for the 1960 Winter Olympics. He organized 5,000 participants (including 1285 instruments and 2645 voices from nearby California and Nevada school bands) and some 2,000 doves (released during the Opening Ceremony). The musicians Disney had gathered provided accompaniment for alpine ski racer Andrea Meade Lawrence as she skied down to hand the torch to speed skater Kenneth Henry, who in turn lit the Olympic flame.
Walt also orchestrated the closing ceremonies on February 28.
The U.S. won a total of 10 medals that winter: 3 Gold, 4 Silver, and 3 Bronze.
Posted by Tony at 12:01 AM No comments:

February 09: Justice In The World

On this day in 1914, animator and engineer Bill Justice was born in Dayton, Ohio.
First joining Disney in 1937, he worked on such early features as Fantasia, The Three Caballeros, and Peter Pan. Justice was later the director for the 1957 The Truth About Mother Goose, the 1959 Noah's Ark, and the 1962 A Symposium On Popular Songs - all of which were nominated for Academy Awards. During the 1950s he directed the opening sequence for the television series the Mickey Mouse Club.
In 1965 he joined WED Enterprises, where he programmed Audio-Animatronic figures for such park attractions as Pirates of the Caribbean, the Haunted Mansion, Country Bear Jamboree, and Hall of Presidents.
After a 42-year career, Justice retired in 1979. In 1992 his book "Justice For Disney" was published. Bill Justice was named a Disney Legend in 1996.

Click HERE for more February 09 Disney history.
Posted by Tony at 9:14 AM 3 comments:

On this day in 1940, Disney's animated Pinocchio premiered in New York City. Two days later it would debut in Los Angeles and be generally released February 23.
Released to theaters by RKO Radio Pictures, Pinocchio was Disney's second animated feature.
Believe it or not ... the film was not a commercial success on its initial release. It only recouped $1.9 million against Disney's $2.6 million budget!

Click HERE for more February 07 Disney history
Posted by Tony at 12:01 AM No comments:

On this day in 1925, John Donald Fiedler was born in Platteville, Wisconsin. A voice actor and character actor (in stage, film, television, and radio), Fiedler is best known to Disney fans as the voice of Pooh's lovable but nervous friend Piglet.
Fiedler first voiced Piglet for the 1966 Winnie the Pooh and the Honey Tree. The success of Disney's Pooh bear brought Fiedler more work as Piglet in such shorts and home video releases as Winnie the Pooh and the Blustery Day, Winnie the Pooh and Tigger Too, The Many Adventures of Winnie the Pooh, Winnie the Pooh Discovers the Seasons, Winnie the Pooh and a Day for Eeyore and Piglet's Big Movie.
Fiedler's Disney credits also included the 1969 live-action feature Rascal, the 1974 made-for-TV movie The Whiz Kid and the Mystery at Riverton, the 1976 feature The Shaggy D.A., the 1977 animated The Rescuers (as Owl), and the 2005 The Emperor's New Groove 2: Kronk's New Groove (as Rudy).
Probably best recognized from the 1970's CBS comedy series The Bob Newhart Show (as Mr. Peterson), Fiedler's TV credits also include episodes of The Twilight Zone, The Munsters, Star Trek, and The Odd Couple.
Fiedler passed in 2005 at the age of 80 ... a day after the death of Paul Winchell, the voice of Tigger.

February 02: Pack Up The Sand

On this day in 2008, Rock 'n Roll Beach Club - a rock-themed dance club - closed in Downtown Disney, Florida. A popular club offering live music (what a concept) the venue featured three floors: a dance floor on the 1st level and games & food on levels 2 and 3. Like all the over-21 clubs in Pleasure Island, the Beach Club closed as part of Disney's plans for more shops & restaurants.
(Live music rules ... and not the kind where bands "play" to pre-recorded tracks.)

Click HERE for more February 02 Disney history.
Posted by Tony at 6:47 AM No comments:

February 01: Birth of a Mumy

On this day in 1954, actor/musician Bill Mumy was born in San Gabriel, California.
An actor since childhood, fans of classic TV will recognize Mumy as Will Robinson from the 1965-1968 sci-fi series Lost in Space. But years before he "traveled into space," Mumy was already a veteran actor making appearances on such shows as Dennis the Menace, Alfred Hitchcock Presents, and Dr. Kildaire.
Fans of the original The Twilight Zone, know him for his character of Anthony Fremont in the episode "It's a Good Life." (Look for a nod to Anthony Fremont the next time you enter the Tower of Terror attraction.) Mumy also appeared in the Twilight episodes "In Praise of Pip" and "Long Distance Call."
His connection with Disney began with appearances on the Disneyland TV series. In 1962 he played Petey Loomis in the 2-part "Sammy, the Way-Out Seal." Two years later he portrayed Freddy Gray in the episodes "For the Love of Willadean: Treasure in the Haunted House" and "For the Love of Willadean: A Taste of Melon."
Mumy also appeared in Disney's 1969 comedy feature Rascal, playing young teen Sterling North.
Fast forward to the year 2000 which found Mumy supplying the voice of Eon for Disney's animated Buzz Lightyear of Star Command.
An accomplished musician, Mumy even wrote music for Disney's Adventures in Wonderland.
(He's recorded & written with America, toured with Shaun Cassidy, worked with Rick Springfiled, and has released CDs of his own music.)
You may also recognize Mumy from countless voice-overs; he's narrated over 50 episode of the Arts & Entertainment Channel's Biography series.

Click HERE for more February 01 Disney history.
Posted by Tony at 7:52 AM No comments: