On this day in 1950, Walt Disney's very first television special aired. Sponsored by Coca-Cola, One Hour in Wonderland was viewed by approximately 20 million people - which was amazing considering TV was in its infancy and only 10.5 million TV sets existed in the U.S.!

Click HERE for more December 25 Disney history.
Posted by Tony at 9:35 AM No comments:

On this day in 1887, comic actor Eric Blore was born in London, England. Disney fans know him as the voice of Mr. Toad in the animated 1949 feature The Adventures of Ichabod and Mr. Toad.
First establishing himself in England before coming to America, Blore's long list of movie credits include Winter Wonderland, Easy to Look At, Road to Zanzibar, and The Great Gatsby.

Click HERE for more December 23 Disney history.
Posted by Tony at 5:16 AM No comments: 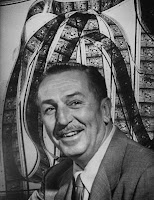 On this day in 1901, Walter Elias Disney was born in Chicago, Illinois.

Click HERE for more December 05 Disney history.
Posted by Tony at 8:17 AM No comments:

On this day in 1965, That Darn Cat! - a Walt Disney feature film starring Hayley Mills, Dean Jones, Dorothy Provine, and Roddy McDowall - was released. Based on the book Undercover Cat (by Gordon and Mildred Gordon) it was the last of 6 films Hayley Mills made for Disney. She had appeared in Pollyana, The Parent Trap, In Search of the Castaways, Summer Magic, and The Moon-Spinners.
The plot of That Darn Cat! centers around two sisters Patti and Ingrid (Mills & Provine) and their mischievous Siamese cat who gets mixed up with bank robbers (played by Frank Gorshin & Neville Brand). Dean Jones plays FBI agent Zeke Kelso and Roddy McDowall plays Gregory - Ingrid's love interest.
The film's title song was written by the Sherman Brothers and sung by Bobby Darin. The film's writers were nominated by the Writers Guild of America for Best Written American Comedy.
Disney would later remake That Darn Cat! in 1997 - starring Christina Ricci.

Click HERE for more December 02 Disney history.
Posted by Tony at 12:01 AM No comments:

December 01: God and My Country

On this day in 1966, Disney's live-action feature Follow Me, Boys! was released. Based on the book God and My Country by MacKinlay Kantor, the movie starred Fred MacMurray as a road musician who settles down in a small Midwestern town.
MacMurray's character Lemuel "Lem" Siddons takes a job in a general store. Wanting to impress a pretty co-worker named Vida (played by Vera Miles) and instilling values in the local boys, he starts a Scout troop. (It is one of the few movies where Boy Scouts are key to the film.) Eventually the two marry and adopt a young boy named Whitey (played by Kurt Russell). The Scouts take Lem on a lifelong adventure filled with laughter, triumphs and sadness.
Follow Me, Boys! also starred veteran actress Lillian Gish (as Hetty Seibert) and comic actor Charlie Ruggles (as John Everet Hughes).
MacMurray, already a favorite with movie and televison audiences, had appeared in such Disney films as The Absent-Minded Professor, Bon Voyage, and Son of Flubber.
Vera Miles, best known for her performance in the classic films Psycho and The Man Who Shot Liberty Valance, had also appeared in Disney films prior to Follow Me, Boys!. Miles appeared in the 1964 A Tiger Walks and the 1965 Those Calloways. She would continue to play Disney roles well into the 1970s.
For actor Kurt Russell, Follow Me, Boys! was his Disney film debut and the beginning of a long career at the studio, as he went on to appear in such films as The Horse in the Gray Flannel Suit, The Computer Wore Tennis Shoes, The Barefoot Executive, and Now You See Him, Now You Don't.
Although a bit corny and sentimental, Follow Me, Boys! struck a responsive chord with moviegoers ... to the tune of a $5.5 million box-office take.

Click HERE for more December 01 Disney history.
Posted by Tony at 12:01 AM No comments: