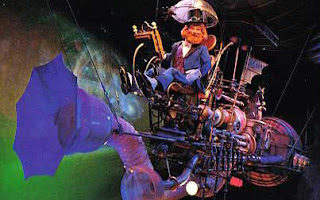 Journey Into Imagination, an Epcot attraction in The Imagination! pavilion opened on this day in 1983. (The pavilion itself had already opened with the rest of EPCOT the year before.)

Hosted by the Dreamfinder and Figment, guests ride in Omnimover vehicles to the tune of "One Little Spark" (written by the Sherman Brothers). Dreamfinder, a pilot with a red beard dressed in a blue suit and top hat (and voiced by veteran actor Chuck McCann) uses his Dream Mobile to catch and create dreams and idea. One of these creations is a purple dragon-like creature named Figment (first voiced by Billy Barty). Dreamfinder and Figment teach guests that Imagination is the key to unlocking the hidden wonders of the world.

The ride temporarily closed in October 1998 and was renovated to become Journey into YOUR Imagination. This second version, which debuted in 1999, also featured comic actor Eric Idle as Dr. Nigel Channing.

A third version (and the most current) debuted in 2002 as Journey into Imagination with Figment, with Figment playing a larger role and new verses added to "One Little Spark." As Billy Barty had passed away in 2000, Dave Goelz provided the voice for Figment.

Up until August 2010, Kodak had been the one and only sponsor of the attraction (and the pavilion).