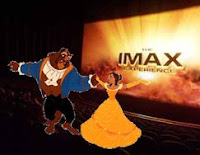 On this day in 2002, an improved version of Disney's Beauty and the Beast (first released in 1991) was released to IMAX and other giant screen theaters. The film, reissued in IMAX format, featured a new musical sequence and enhanced imagery - that animators spent over a year working on. The new musical sequence featured the song "Human Again," written by Howard Ashman and Alan Menken. Written for the original version of Beauty and the Beast, the song had been cut after it was storyboarded. It marked the first time Disney had ever animated a new sequence for a previously-released feature.
IMAX (which is short for Image MAXimum) is a film format that has the capacity to display images of far greater size and resolution than other modern systems.

Have a happy and healthy New Year.

Click HERE for more January 01 Disney history.
Posted by Tony at 8:15 AM