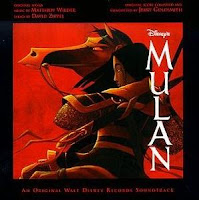 On this day in 1998, Mulan: An Original Walt Disney Soundtrack was released. (The animated film itself wouldn't be released until June 19.)
The soundtrack featured songs written by Matthew Wilder and Dave Zippel and a score composed and conducted by the legendary Jerry Goldsmith. Vocalists featured on the release included Lea Salonga, Donny Osmond, 98 Degrees, Jaz Coleman, Stevie Wonder, and former Disney Channel Mouseketeer Christina Aguilera.
Among the 13 tracks were two versions of the hit song "Reflection" - one sung by Salonga (the singing voice of Mulan) and a more "radio friendly" version sung by Aguilera. (The pop version was so well received that Aguilera scored a recording contract with RCA records.) Other highlights included "True to Your Heart" sung by Wonder and 98 Degrees, and "I'll Make a Man Out of You" featuring Osmond (the singing voice of Shang).
The album went on to peak at #24 on the Billboard 200 and was later nominated for an Academy Award.
Singer-songwriter Matthew Wilder is probably best remembered for his 1983 Top 5 hit "Break My Stride." Today he is known as a songwriter and producer - working with such acts as No Doubt, Christina Aguilera, Kelly Clarkson, and Miley Cyrus.
Tony Award-winning lyricist Dave Zippel had worked with composer Alan Menken on Disney's 1997 Hercules. He would go on to collaborate with Phil Collins for Disney's Tarzan two years later.
Veteran film composer Jerry Goldsmith (known for countless television and feature film scores) would go on to supply the music for Disney's popular theme park attraction Soarin'.

Click HERE for more June 02 Disney history.
Posted by Tony at 6:51 AM