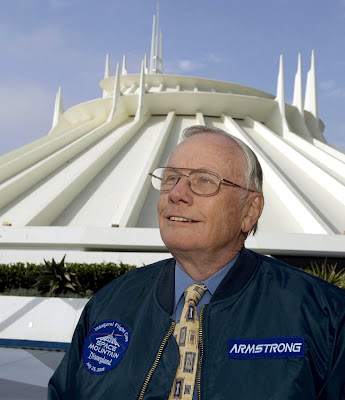 On this day in 2005 Disneyland's Space Mountain officially reopened (after nearly a 2 1/2 year refurbishment) with a special 13-minute morning ceremony. (Ironically construction had begun on Space Mountain on this very day in 1975.)

Space Mountain's track was completely rebuilt (although it is the exact same layout first designed back in the 1970s), the foundation was laid 30 feet deeper (making the ride safer), and the floor of the building was also lowered some 10 feet. Space Mountain also received new rocket sleds, a new queue, new music by Michael Giacchino, new special effects and a new storyline.

Reopening only two days before Disneyland's big 50th anniversary celebration, Disneyland guests were surprised as the projected debut date had been originally set for November 2005. What was also surprising to guests on this day was the appearance of space traveler Neil Armstrong.

The first person to set foot on the Moon (in July 1969), Armstrong was also an aviator, aerospace engineer and professor. His very first space flight had been in 1966 aboard Gemini 8 as the command pilot, but he will always be remembered as the mission commander of Apollo 11 whose historic moon landing forever changed the world.

He then introduced Armstrong who was escorted in by Mickey Mouse (dressed as an astronaut of course). Armstrong spoke of his early days in the U.S. Navy, Disney's television segments on space travel, and his illustrious career at NASA. Together Armstrong and Mickey unveiled a plaque given to Armstrong featuring an early drawing of Space Mountain and these words:

Presented to Mr. Neil Armstrong for his courage and adventurous spirit that continues to inspire all mankind to reach for the stars.

Click HERE for more out of this world Disney history.
Posted by Tony at 6:39 AM