April 02: King of the Fairy Tale 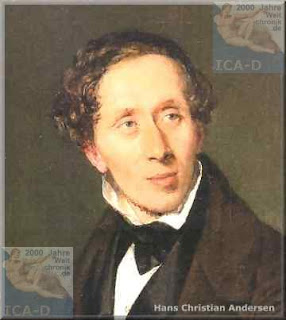 On this day in 1805 - novelist, short story writer and fairy tale writer Hans Christian Andersen was born in Denmark. During his lifetime he was acclaimed for delighting children worldwide with such stories as The Little Match Girl (1848), The Little Mermaid (1836) and The Ugly Duckling (1844). Those 3 stories in particular were later adapted into animated works by Disney.

Although not the first animated version of Andersen's tale, The Little Match Girl was produced into a short by Walt Disney Feature Animation in 2006. A story about a dying child's hallucinations, Disney's version was originally intended to be a part of a new Fantasia film, but this project was canceled. It was appropriately released as a special feature on the 2006 Platinum Edition DVD of The Little Mermaid. Nominated for an Academy Award for best animated short film, The Little Match Girl was directed by Roger Allers and produced by Don Hahn. In a unique approach for Disney, the story was set to music and told entirely through mime.

The Little Mermaid, perhaps Andersen's best known story, was first published in April 1837. About a young mermaid willing to give up her life in the sea and her identity as a mermaid to gain a human soul and the love of a human prince, it was loosely adapted into an animated musical film by Disney in 1989. A huge box office success, it spawned two sequels The Little Mermaid II: Return to the Sea and The Little Mermaid: Ariel's Beginning. In January 2008, a stage version of the Disney film opened on Broadway.

Andersen's 1844 The Ugly Duckling was adapted into two Silly Symphony animated shorts by Disney. The first was produced in 1931 in black and white, and the other in 1939 in Technicolor - winning the 1939 Academy Award for Best Short Subject (Cartoons). Andersen's The Ugly Duckling tells of a homely little bird born in a barnyard who suffers abuse from his neighbors until, much to his delight (and to the surprise of others), he matures into a graceful swan.
Disney's 1931 version differs significantly to the original tale. Instead of a cygnet (hatched among ducklings), who suffers many hardships before maturing into a beautiful swan, Disney portrayed a duckling (hatched among chicks) who must prove himself a hero before gaining love and acceptance from others. Disney's beautifully animated 1939 color version was actually the final Silly Symphony and was based closer on Andersen's original tale. Legendary Warner Bros. animator Chuck Jones once called this version "One of the best short subjects ever made."

Andersen's poetry and stories have been translated into more than 150 languages and are still widely read by both children and adults. Still admired to this day, there is a statue of The Little Mermaid (placed in Andersen's honor) in Copenhagen and statues of Andersen himself in both Central Park, New York, and Solvang, California.

Click HERE for more April 02 Disney history.
Posted by Tony at 12:01 AM