April 29: Inside The Castle 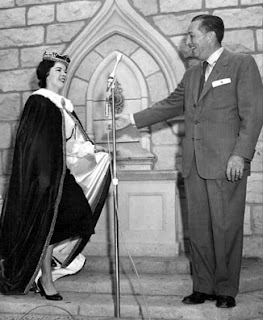 On this day in 1957, the official dedication of a new walk-through attraction inside the Sleeping Beauty Castle took place at Disneyland.
An icon of the park since its debut in 1955, internally the castle had been an incomplete shell (except for dozens of feral cats who had made it their home). Walt Disney himself assigned Imagineer Ken Anderson to design something inside the castle that guests could look at. An idea to explain the story of Sleeping Beauty was hatched. Although Disney's film version wasn't complete at the time, Imagineers designed a walk-through diorama containing scenes of the Sleeping Beauty tale.
The official dedication of the walk-through took place on this day in 1957 ... at 3 p.m. with the Disneyland band performing "When You Wish Upon A Star." Along with Walt helping in the ceremony was actress Shirley Temple dressed as a princess. (As a child Temple had been a huge box-office draw and in 1939 presented Walt with the famous Oscar statues for his Snow White feature.) Also in attendance were Temple's 3 children. (They had all stayed at the Disneyland Hotel and had visited the park the day before the dedication.)
After Walt spoke to the gathered crowd about the new walk-through, Temple told the story of Sleeping Beauty and then cut the ribbon to open the attraction.
In 1977 the walk-through was updated to mirror the actual animated feature. Yet in October 2001, the attraction was "closed for refurbishment." It wasn't until November 2008 that the "Sleeping Beauty Walkthrough" once again opened to guests.

Take a walk-through of April 29 Disney history HERE.
Posted by Tony at 7:36 AM