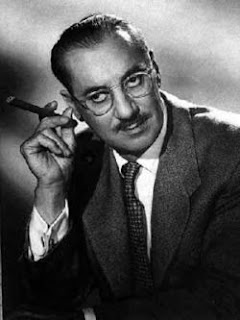 He had a rapid-fire delivery of innuendo-laden patter and was famous for his work on stage, the big screen, radio and television. His name was Groucho Marx and he was born Julius Henry Marx in New York City on this day in 1890.

Groucho made a string of zany feature films along with the Marx Brothers (Chico, Harpo and sometimes Zeppo and Gummo) showcasing their unique appearances and comedic routines carried over from their days in vaudeville. Standing with an exaggerated stooped posture, Groucho's look was distinct as he appeared in thick greasepaint eyebrows and moustache, wearing glasses and always holding his trademark cigar.

All in all Grouch made 25 movies (13 with his brothers) before moving on to radio and ultimately television. But in the 1930s Groucho was easily one of the most recognized and popular characters in Hollywood ... and Walt Disney (a fan himself) knew it. Groucho was animated in at least 4 different Disney shorts.

In January 1932 Disney released the Silly Symphony cartoon The Bird Store featuring a wide variety of birds (some imaginative - some real). When a cat manages to enter the shop, the birds band together to defend their home. Among the caged birds ... the four Marx Brothers!

The following year Disney released the short Mickey's Gala Premiere in which Mickey and his pals attend the debut of the latest cartoon at Grauman's Chinese Theater. The premiere is filled with many Hollywood stars including the Marx Brothers!

In December 1938 Disney released Mother Goose Goes Hollywood, a cartoon short that takes viewers on a trip through famous rhymes with Hollywood Stars taking the place of the storybook characters. Playing the part of King Cole's Fiddlers Three ... Harpo, Chico and Groucho Marx!

Disney's The Autograph Hound was released in September 1939. This cartoon finds Donald Duck trying to collect autographs at a Hollywood Studio - while trying to avoid an angry security guard. This time it is just Groucho and his "silent" brother Harpo who make an appearance.

Fast-forward to March 18, 1954 ... Groucho's television quiz show You Bet Your Life is one of the most popular programs on the air. On that particular day Disney animator Ward Kimball (who ironically had worked on some of the shorts featuring Groucho) appeared as a contestant.

Awarded with an honorary Academy Award in 1974, Groucho passed away three years later (the last living brother of the popular trio - although Zeppo outlived all of them). Groucho's wit and style is still loved today as the Marx Brothers continue to make generations of film fans laugh.

"Although it is generally known, I think it's about time to announce that I was born at a very early age." -Groucho Marx

Click HERE for more October 2 Disney history.
Posted by Tony at 8:16 AM

He was a comic genius to be sure.