October 3: According to Jim 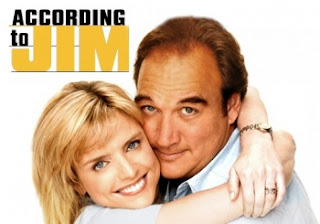 On this day in 2001, According to Jim - a new sitcom from Disney's Touchstone Television - premiered on ABC with the "Pilot" episode.

The series starred Jim Belushi as Jim, a married suburban family man who is comically abrasive, a bit lazy, but always lovable. Actress Courtney Thorne-Smith (best known for her role on Melrose Place) played his wife Cheryl the mother of five children (2 girls and a boy for most of the series' run - though twin baby boys were added in the final season). Cheryl's jolly brother Andy - portrayed by Larry Joe Campbell - was also Jim's best buddy and business partner. Their wise-cracking sister Dana - played by Kimberly Williams-Paisley (best know for her breakout role in Touchstone's Father of the Bride) frequently teamed up with Cheryl against Jim.

According to Jim ran for 8 seasons and can be seen today in syndication.

Click HERE for more October 3 Disney history.
Posted by Tony at 10:39 AM