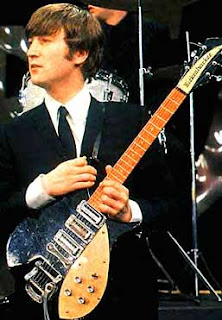 On this day in 1940, singer-songwriter John Lennon, who rose to worldwide fame as a founding member of The Beatles, was born in Liverpool, England. Along with Paul McCartney, Lennon formed one of the most successful songwriting teams of the 20th century. So what does the writer of such songs as "Imagine" and "Give Peace a Chance" have to do with Disney?
You'd be surprised ...

In August 1965 Walt Disney met with Beatles' manager Brian Epstein to discuss the possibility of the Fab Four performing songs for his upcoming animated feature The Jungle Book. The Beatles at this time were already worldwide stars with a string of top selling albums and two feature films to their credit. Supposedly Lennon himself nixed the idea of lending their songs (and or voices) to an animated feature and Walt (reportedly not really a big fan of their music) used semi-soundalikes to voice a group of vultures. In fact, Flaps the Vulture was voiced by Chad Stuart - of the English rock duo Chad & Jeremy whose early success came about during The Beatles rise to fame. (The Jungle Book was released in October 1967 ... unfortunately without The Beatles.)

In late 1973 Lennon visited Disneyland with his son Julian, girlfriend May, ex-wife Cynthia (the mother of Julian) and friends Mal Evans (once a Beatle roadie) and Jesse Ed Davis. At this time, The Beatles (still as popular as ever) had been broken up for some 3 years. Lennon, who had not seen Julian in 4 years, thought Disneyland would be a perfect place to re-connect with his 9-year-old son.

One year later Lennon along with Julian and May spent the last week of December in Central Florida - specifically at Disney's Polynesian Village Hotel (today known as Disney's Polynesian Resort). The trio enjoyed a wonderful vacation - even getting to ride in the front of the monorail on two separate occasions. But something significant took place at the Polynesian on December 29.
Although The Beatles hadn't been a band since 1970 it had taken some 4 years for the proper legal documents to be drawn-up dividing their massive earnings. The other three Beatles (Paul McCartney, George Harrison, and Ringo Starr) had already signed the voluminous documents when copies were brought down to Florida by one of Apple's lawyers. (Apple Corps Ltd - a multi-armed multimedia corporation - was first founded in 1968 by The Beatles.) When Lennon picked up his pen and signed the document, he officially ended the greatest rock band in history ... at Walt Disney World.

In the early 1990s The Disney Channel (offering massively different programming than today) showed some Beatle-themed specials. One in particular, "The Making of Sgt. Pepper" was broadcast on September 27, 1992. The program featured interviews and rare footage of the making of the group's 8th studio album "Sgt. Pepper's Lonely Hearts Club Band" (first released in 1967).
Two years later, The Disney Channel aired The Beatles' 1964 feature film "A Hard Day's Night" in honor of the 30th anniversary of the group first coming to the U.S.

The Beatles' Disney-ties don't end there ... take a visit to Epcot and you will find The British Invasion - a tribute band performing outside of the United Kingdom pavilion, and of course a slew of Beatle merchandise to purchase.

In August 2009 Robert Zemeckis and Disney announced that a remake of The Beatles' animated classic "Yellow Submarine" would be re-made in the same style as "Disney's A Christmas Carol." It is currently slotted for a 2012 release.

For a more in-depth look at The Beatles and Disney - visit the fabulous blog Disney and the Beatles.
Posted by Tony at 8:15 AM