February 23: The First of the Nine Old Men 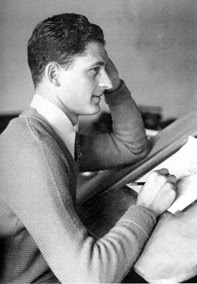 On this day in 1927, a 19-year-old high school graduate named Leslie James Clark began his first day of work at the Disney Studio.
Les Clark had first met Walt Disney while working at a confectionery in Hollywood in the summer of 1925 (in fact Walt complimented the youngster on the lettering he had made for the shop's window menus). A shy high school student who loved art, Clark was waiting tables part-time to help his family pay the bills. The Clark family, originally from Salt Lake City, had come to Los Angeles in search of a better life. But times were tough for many everywhere and Les and his brothers and sisters did what they could to contribute.
In 1927 when Clark was about to graduate from Venice High School, he mustered up the nerve to ask Disney for a job. He was encouraged to bring some of his drawings to the Hyperion Avenue studio and ... amazingly was hired! (Disney's success with his Alice Comedies had allowed Walt and Roy to slowly add a staff of animators.) Walt warned Clark that the "job might be temporary." Les Clark's job at Disney lasted nearly a half a century (until 1975).
During those years Clark, who started out with very little training but was determined to succeed, not only became a senior animator & director, but also one of Walt's legendary Nine Old Men. He entered the field of animation at a crucial time and took part in events that shaped Disney's future and the history of the art form itself. The job at Disney changed Clark's life and he in return paid Walt with loyalty and an unquenchable enthusiasm for learning and detail.
Clark's credits include the later Alice Comedies, the Silly Symphony shorts, many of the Mickey Mouse cartoons, and all of the classic animated features (beginning with Snow White). His career began in the silent film era and continued right through to the age of television!
When Les Clark retired on September 30, 1975, he was the longest continuously employed member of Walt Disney Productions.

Click HERE for more February 23 Disney history.
Posted by Tony at 6:38 AM