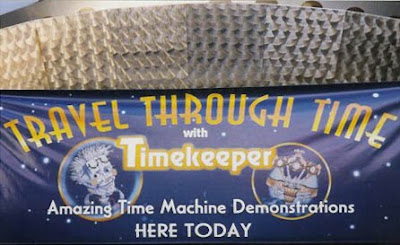 On this day in 2006, the Disney World attraction The Timekeeper (originally called From Time to Time) officially closed. The Magic Kingdom attraction first opened back in November 1994 in Tomorrowland, but due to low attendance was put on a seasonable schedule of operation in April 2001 (as was Walt Disney's Carousel of Progress).
The Timekeeper was a Circle-Vision 360° film that for the first time also incorporated Audio-Animatronics. Before the actual show, guests were introduced to the invention responsible for the film, 9-Eye (voiced by Rhea Perlman). The nine eyes represented the nine cameras used in filming the show in the round. 9-Eye was the invention of The Timekeeper (voiced by Robin Williams) who "loved to take the time to take you through time."
An interesting concept with an international cast, beautifully shot scenes from around the world and music by acclaimed composer Bruce Broughton, The Timekeeper never really caught on with Magic Kingdom guests. The attraction's Tomorrowland home was an inconspicuous building that today hosts Monsters, Inc. Laugh Floor. Although The Timekeeper hadn't operated since late 2005, it was permanently closed on February 26, 2006.
Not the first of its kind, The Timekeeper originally opened in Disneyland Paris in April 1992 (but closed in September 2004) and then in Tokyo Disneyland in April 1993 (ending its run in September 2002). A version was planned for Disneyland as well, but The Timekeeper never made it beyond planning stages.
When it closed at WDW, it was the last Timekeeper still entertaining guests.

Travel back in time by clicking HERE for more February 26 Disney history.
Posted by Tony at 9:19 AM