January 01: Disney & The Tournament of Roses 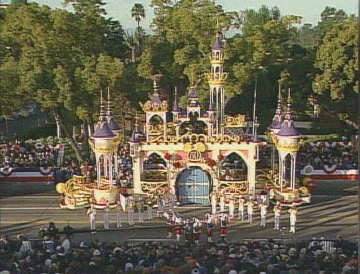 Since 1890, the Tournament of Roses Parade has been a yearly event to showcase Pasadena's mild-weather, beautiful flowers and elaborate floats. In 1902 a college football game was added to enhance the festivities. Nicknamed "The Granddaddy of Them All" the Rose Bowl Game has been a sell-out since 1947 (the year the game was played under an exclusive agreement with the Big Ten and Pac-10 conferences).
The Tournament of Roses Parade (also simply known as the Rose Parade) has become America's New Year Celebration - watched by hundreds of thousands of spectators live (as well as millions of television viewers).
Over the years the Walt Disney Company has taken part in the annual New Year parade:
-In 1938, Disney premiered a float featuring Snow White and the Seven Dwarfs - the stars of the then newly released animated feature.
-The 66th Tournament of Roses in 1955 featured the very first Disneyland float ... and the Fire House Five Plus Two Dixieland band (made up of Disney Studio employees).
-In 1966, Walt Disney himself served as Grand Marshal of the parade riding along with Mickey Mouse in a white Chrysler Imperial.
-Disneyland presented a special 25th Anniversary pre-parade show for the 92nd Rose Parade in 1980.
-In 2000, Roy E. Disney (Walt's nephew) continued the tradition by serving as the Grand Marshal of the parade.
-In 2004, the Disneyland Resort presented a parade float inspired by the park's newest attraction ... The Twilight Zone Tower of Terror! Named "A Sudden Drop In Pitch," it was the tallest float in Rose Parade history, with a height of nearly 100 feet.
-The following year Mickey Mouse served as Grand Marshal for the 116 Tournament of Roses (helping to kick-off Disneyland's 50th anniversary celebration).
-In 2006, the parade was held on January 2nd (a very rainy Monday) in observance of the parade's "never on a Sunday" rule. Disney took part by featuring a float showcasing castles from each of its parks (see photo above).
-In 2007, Disneyland's monorail was featured on a float celebrating the 150th birthday of Anaheim.

Click HERE to learn more and have a Happy New Year!
Posted by Tony at 8:08 AM