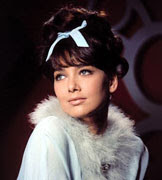 On this day in 1937, actress Suzanne Pleshette - star of stage, screen, and television - was born in Brooklyn Heights, New York City. She will always be fondly remembered for her Emmy Award-nominated role of Emily Hartley on the 1970s hit sitcom The Bob Newhart Show. But Disney fans will always remember Pleshette for her appearances in many Disney features.

Her first film for Disney was the 1965 The Ugly Dachshund in which she starred along with Dean Jones. The story of a Great Dane who believes he is a dachshund, the film was a light-hearted comedy directed by Norman Tokar. Pleshette portrayed Fran Garrison husband of Mark (played by Jones) who believes their Great Dane Brutus is a bad influence on her precious champion dachshunds.

In 1976 Pleshette was featured in the comedy The Shaggy D.A. playing wife to ... you guessed it - Dean Jones! A sequel to the 1959 The Shaggy Dog, the film follows Wilby Daniels (played by Jones) who is now an adult and a successful lawyer ... but can still turn into a dog!

It wasn't until 1998 that Pleshette's Disney credits included an animated feature. That year she provided the voice of Zira (mother of Kovu) for The Lion King II: Simba's Pride. She was nominated for an Annie Award for Outstanding Individual Achievement for Voice Acting.

Besides her Disney and Bob Newhart roles, Pleshette's career thrived throughout her life as she appeared in countless feature films, TV films and guest appearances on such sitcoms as 8 Simple Rules ... For Dating My Teenage Daughter and Will & Grace.

Sadly Suzanne Pleshette passed away too soon in early January 2008 - the same year she received a star on the Hollywood Walk of Fame (appropriately on the anniversary of her birth).

"I'm an actress and that's why I'm still here. Anybody who has the illusion that you can have a career as long as I have and be a star is kidding themselves." -Suzanne Pleshette

Click HERE for much more January 31 Disney history.
Posted by Tony at 8:52 AM