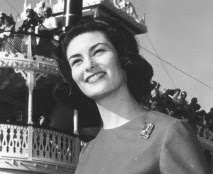 On this day in 1965, Walt Disney's Wonderful World of Color aired episode 13 (of season 11) in which Walt Disney celebrated the 10th anniversary of his Anaheim park.
This episode was also the first appearance of Julie Reihm (or Miss Disneyland as Walt called her), Disneyland's very first ambassador. Selected personally by Walt, Miss Reihm (pictured left) was to originally be the only ambassador - initially there was no intention of extending the position beyond 1965!
Walt showed Miss Disneyland and the TV audience his plans for It's A Small World (already a proven success at the 1964/65 World's Fair), and a sneak peek at the future plans for the Haunted Mansion and Pirates of the Caribbean attractions. Footage of how Disneyland was built and the famous people who visited the park were also shown.

Please head on over HERE for much more January 03 Disney history.
Posted by Tony at 12:01 AM