January 17: In Honor of Mr. Franklin 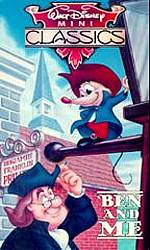 On this day in 1706 Benjamin Franklin was born in Boston, Massachusetts. An important figure in early American history, Franklin was a statesman, inventor, scientist, printer, publisher and the first U.S. Postmaster General. In honor of Mr Franklin, let's take a look at the animated Disney short Ben and Me.
First released through RKO in November 1953 (along with The Living Desert) Ben and Me was adapted from a 1939 children's book written & illustrated by
Robert Lawson. The story reveals the contribu

Click HERE for more January 17 Disney history.
Posted by Tony at 7:58 AM