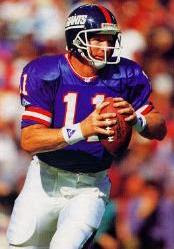 The "I'm Going to Disney World!" and "I'm Going to Disneyland!" advertising slogans, used in commercials to advertise Disney theme parks, first began airing in 1987. Originally broadcast following the Super Bowl and featuring an NFL player, the campaign has also included non-sport competitors (such as American Idol winners).
Former Disney CEO Michael Eisner credited his wife with the idea for the campaign. According to his 1998 memoir Work in Progress, during the 1987 opening of Star Tours at Disneyland, he and his wife Jane dined with Dick Rutan and Jeana Yeager (who had piloted the first aircraft to fly around the world without stopping or refueling). When Jane asked them what they were going to do next, they simply replied "Well, we're going to Disneyland."
Weeks later Disney launched the series following Super Bowl XXI with a commercial featuring winning New York Giants quarterback Phil Simms (pictured left).

The phrase has earned iconic status since 1987, being parodied or copied in everything from films and TV shows to interviews. Even Bruce Springsteen in February 2009 shouted "I'm Going to Disneyland!" following his Super Bowl halftime performance!

Click HERE for more January 26 Disney History.
Posted by Tony at 6:34 AM