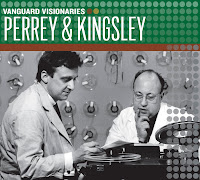 On this day in 1929, Jean-Jacques Perrey was born in France. An electronic music producer and pioneer of the genre, he was one of the first Moog synthesizer musicians.
Although known for his solo albums, Perrey also recorded two albums with German composer Gershon Kingsley (known for writing the first ever electronic pop instrumental song, "Popcorn"). Their second album together titled Kaleidoscope Vibrations: Spotlight on the Moog was released in 1967 on Vanguard Records. One of the fourteen tracks on the album was a song written by the duo called "Baroque Hoedown."
Fast-forward to 1980 ... Jean-Jacques Perrey is visiting Walt Disney World and to his surprise, he hears his "Baroque Hoedown" (re-recorded by Don Dorsey) being used for Disney's Main Street Electric Parade!
Perrey's unique rhythmic samples (originally using magnetic tapes) and quirky synth melodies have influenced generations of musicians, songwriters, and synthesizer/sound programmers and his "Baroque Hoedown" will forever be a part of Disney history.
Happy 81st birthday Mr. Perrey!

March on over HERE for more January 20 Disney history.
Posted by Tony at 1:41 PM