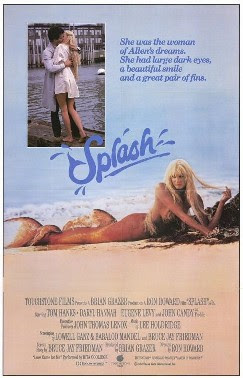 On this day in 1984 the feature Splash, the first film produced by Disney's Touchstone Films (today known as Touchstone Pictures) was released. The comedy, about a man who is reunited with a mermaid who saved him from drowning as a boy, was directed by Ron Howard.
The idea for the film had been turned down by numerous studios until The Walt Disney Company (at the time headed by Ron Miller) agreed to produce it. Many big name Hollywood stars were considered for the main role of Allen Bauer, but the part went to a lesser known actor named Tom Hanks. Actress Daryl Hannah played Madison (the mermaid) and John Candy portrayed Allen's brother Freddie. The cast was filled out with such great character actors as Eugene Levy (Candy's SCTV comrade), Dody Goodman, Richard B. Shull and comedian Shecky Greene.
Cameo appearances in Splash included screenwriters Lowell Ganz and Babaloo Mandel (who were later nominated for an Academy Award for Best Screenplay) and Ron Howard's brother Clint Howard and their father Rance Howard!
Some of Splash was filmed on the beach in Gorda Cay in the Bahamas ... today known as Disney's private island Castaway Cay.
The movie was a huge success and helped propel the careers of Howard (as a director) and Hanks (as a leading man).

Dive down in HERE for more March 09 Disney history.
Posted by Tony at 11:17 AM