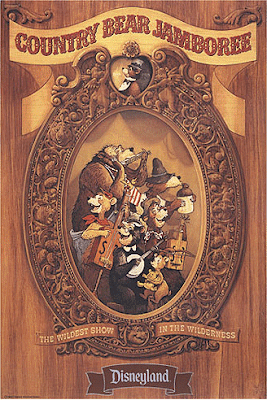 "Howdy folks! Welcome to the one and only, original Country Bear Jamboree, featuring a bit of Americana - our musical heritage of the past!"

On this day in 1972, Disneyland revealed its newest attraction ... The Country Bear Jamboree.
Located in Bear Country (the area formerly called the Indian Village but today known as Critter Country) The Country Bear Jamboree was a musical stage show featuring audio-animatronic figures. The figures, mostly bears performing Country music, rose up to the stage on platforms, descended from the ceiling and appeared from behind curtains. There were even audio-animatronic animal heads mounted on the walls who interacted with the characters on stage - thus putting the audience practically in the middle of the action.
Disneyland's Country Bear was actually Disney's second version, as one had opened at Walt Disney World on the park's opening day in 1971. The attraction can be traced back to the 1960s, when Walt himself wanted the bears to appear at Disney's Mineral King Ski Resort. The project was handed over to Imagineers Marc Davis and Al Bertino, who designed the bears to perform in a restaurant show type atmosphere. Mineral King Ski Resort was never built but the idea was transferred to Walt Disney World with music created by Imagineer X Atencio and musical director George Bruns.
Due to the tremendous popularity of the show in WDW, an identical version was added to Disneyland - where it ran until 2001. Today the space is occupied by a different bear starring in a totally different attraction ... The Many Adventures of Winnie the Pooh.

Head on over HERE for much more March 24 Disney history.
Posted by Tony at 7:15 AM