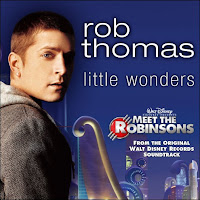 On this day in 2007 Meet the Robinsons - a soundtrack for the Disney animated film of the same title - was released. It contained various songs by different artists plus Danny Elfman's score. (The film itself would be released 3 days later.)

The main single, "Little Wonders" written and performed by Rob Thomas (best known as a solo artist and the lead singer of Matchbox Twenty), reached number 58 on the Billboard Hot 100.
The song was featured at the end of the film.

Click HERE for more March 27 Disney history.
Posted by Tony at 7:11 AM