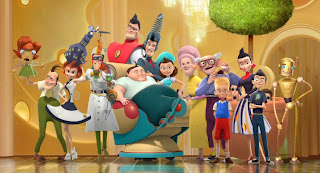 On this day in 2007, the computer-animated Meet the Robinsons was released.
About an orphan named Lewis who dreams of finding a family, it was based on the book A Day with Wilbur Robinson, by William Joyce. As the fusion between Disney and Pixar happened during the early production of the film, Pixar's John Lasseter (who became the chief creative officer for the Walt Disney Company) lent a helping hand.
The voice cast included Jordan Fry as Lewis, Wesley Singerman as Wilbur, Steve Anderson (the film's director) as Bowlerhat Guy - the chief villain, Nicole Sullivan as Franny, Angela Bassett as Mildred, Adam West as Uncle Art, Tom Kenny as Mr Willerstein and Tom Selleck as Cornelius.