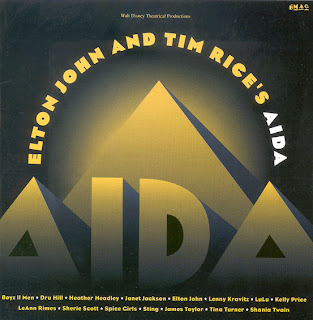 On this day in 1999, CBS-TV aired the special Shania Twain's Winter Break.
Twain, the only female musician to have three albums certified Diamond by the Recording Industry Association of America, was still riding high at the time with her third album Come On Over (which sold 20 million copies in the U.S. alone).
Shania Twain's Winter Break (which was taped at Bayfront Park in Miami, Florida in January 1999) featured special guests Elton John and the Backstreet Boys. Among the songs spotlighted was John's "Amneris' Letter" - co-written with Tim Rice for Disney's stage production of Aida.
Twain chose to sing this tune (with John accompanying her on piano) because she had recently recorded it for Elton John and Tim Rice's Aida, a concept album that predates the main production of the 2000 musical Aida. (The album, featuring an all-star cast of vocalists - including Twain - would be released some 20 days later.)