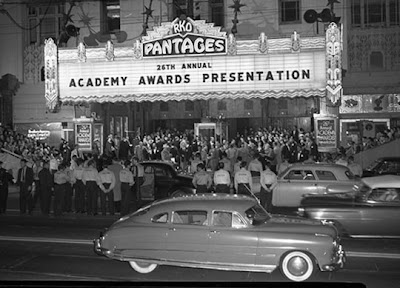 On this day in 1954, the 1953 Academy Awards were presented at the RKO Pantages Theatre in Hollywood and the NBC Century Theatre in New York City. The year's big winner was From Here to Eternity - which nabbed 7 Oscars.

The evening wasn't too shabby for Walt Disney either as the Disney Studio picked up 4 Oscars.

Toot, Whistle, Plunk and Boom won Best Short Subject - Cartoon. An educational "Adventures in Music" short directed by Ward Kimball & Charles A. Nichols, it was the first animated cartoon to be filmed and released in widescreen CinemaScope.

Bear Country, a "True-Life Adventure," won Best Short Subject - Two Reel. Directed by James Algar, it followed the life of black bears from one winter to another. Bear Country beat out four other shorts in this category ... including Disney's own Ben and Me.

The Alaskan Eskimo was awarded Best Documentary Short Subject. Featuring the cinematography of Alfred and Elma Milotte, it depicted the everyday home life of the families in a typical Eskimo village.

The Living Desert, another "True-Life Adventure," won Best Documentary Feature. To this day a landmark of factual film making, it showed the everyday lives of the animals of the desert of the southwestern United States. Directed and co-written by James Algar, it was the first feature-length film in Disney’s "True-Life Adventures" series.

The 26th Academy Awards was the second national telecast of the Awards show - drawing an estimated 43,000,000 viewers.

Click HERE for much more March 25 Disney history.
Posted by Tony at 12:01 AM