March 23: Johnston Teams Up With Moore 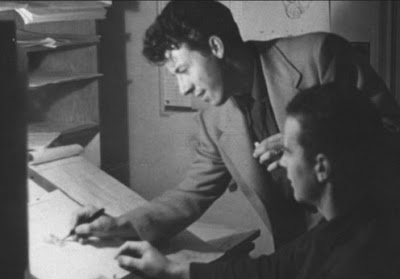 On this day in 1936, young animator Ollie Johnston became master animator Fred Moore's assistant at the Disney Studio.
Johnston, who had only been at Disney since January 1935, had worked on just a handful of Mickey Mouse shorts up to this point - such as Mickey's Garden and Mickey's Rival. Fred Moore on the other hand had been at the studio since the early 1930s and had risen to prominence becoming the resident specialist on Mickey.
Johnston (seated in the photo above) went on to become one of "Walt's Nine Old Men" and contributed to such classics as Snow White, Pinocchio, Fantasia, Bambi, Song of the South, and Cinderella. Moore (standing) sadly passed away in 1952 while working on Peter Pan.

"I learned an awful lot working under Fred Moore on Snow White, who was a wonderful influence. He was a wonderful teacher but he was quiet and not a good speaker; almost incoherent at times. But he could show you through drawings; through “squash and stretch.” Everything he did was pleasing. I don’t care where he put the arm or the leg, it was always in the right place. And the body-in-relationship had appeal. And that’s why Walt made him a supervising animator on Snow White; not because he could go around and lecture to people but because they could look at his drawings and he could show them through that." -Ollie Johnston

Click HERE to discover more March 23 Disney history.
Posted by Tony at 10:16 AM