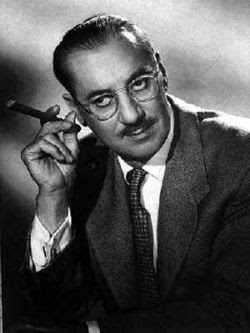 On this day in 1954, Disney animator (and one of Walt's "Nine Old Men") Ward Kimball appeared on the Groucho Marx filmed television quiz show You Bet Your Life.
First starting out as a radio show in 1947, You Bet Your Life moved into the young world of television in 1950. Developed by John Guedel around the genius comedy of Groucho Marx (who by this time was no longer making movies with his famous brothers), the show ruled Thursday nights with high ratings.
Contestants (usually a male and a female made up of a celebrity and a studio guest) had to say the "secret word" - revealed to the audience at the show's outset - with Groucho directing humorous conversation to encourage the word to come up. If the contestants said the correct word, a paper-mache duck would drop down and reward them $100 (with the potential of winning up to $2,000 in bonus rounds). Viewers tuned in to see and hear Groucho (a master ad-libber) grill the guests ... the game itself was almost inconsequential.
During the show's run, many established names from entertainment, literature, and sports took part in the quiz show including the creator of Jiminy Cricket - Mr. Ward Kimball, who was quite the character himself!
Ironically Groucho had been caricatured in three different Disney shorts during the 1930s.
Two of these shorts - Mother Goose Goes Hollywood and The Autograph Hound - both featured the animation of Ward Kimball!
Watch a classic piece of TV and Disney history below:

Click HERE for much more March 18 Disney history.
Posted by Tony at 12:01 AM