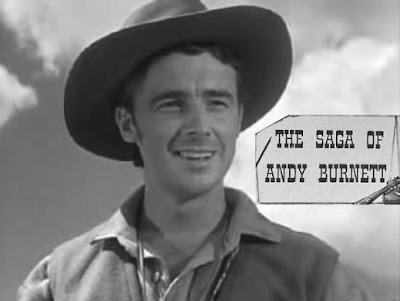 On this day in 1958, the Disneyland television series aired the final part of The Saga of Andy Burnett serial with the episode "The Big Council."
Inspired by the historical novels of writer Stewart Edward White, The Saga of Andy Burnett told the adventures of a frontier teenage boy from Kentucky who fled west (to escape his overbearing stepfather) during the early 1800s. Jerome Courtland starred as Andy with a supporting cast featuring Jeff York, Slim Pickens, and Andrew Duggan. The serial (or mini-series) ran for two seasons with a total of six episodes - which came to a conclusion on this day in 1958.
All in all the episodes included:
"Andy's Initiation" (first airing October 2, 1957)
"Andy's First Chore" (October 9, 1957)
"Andy's Love Affair" (October 16, 1957)
"The Land of Enemies" (February 26, 1958)
"White Man's Medicine" (March 5, 1958)
and finally "The Big Council"
The Saga of Andy Burnett was the first of several attempts by Disney to create a live-action property that could match the success of its previous Davy Crockett programs.
As an adult Jerome Courtland continued to work in television, directing and producing such series as The Flying Nun and The Partridge Family, as well as the the Disney films
Posted by Tony at 6:50 AM